A Daily Dose Of Glamour

A daily dose of glamorous inspiration…

by A Daily Dose Of Glamour 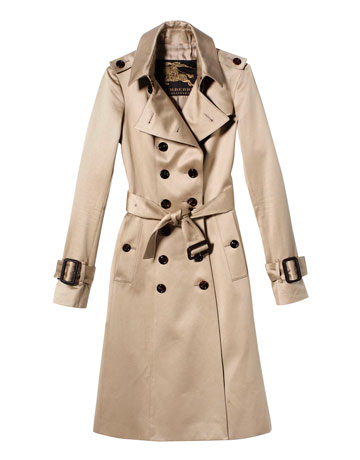 Not too long ago, I wrote about my desire to one day own the chicest in outerwear apparel, from the most luxurious of all brands, the British Burberry trench coat. Today, I came across a featured article on Le Monde.fr, giving a brief, albeit chic, history on one of the U.K’s most well known brands (check out the corresponding slideshow for a visual history as well).  Thank you Burberry for inspiring a trend that gives us modern day fashion warriors an elegant defense against the cold.

DECRYPTION – originally designed for soldiers in the war of 14, this classic finds some of its bite of yesteryear.

The story of this successful play begins with the First World War. In 1914, Englishman Thomas Burberry sees himself ordered a raincoat to protect the Tommies who will soon be mired in the trenches.

This will be the trench coat, cut in a solid gabardine, reinforced shoulders, and fitted withmetal rings. It then loses its warlike character. The mantle of this city and star of the screen displayed by Humphrey Bogart, Audrey Hepburn and Marlene Dietrich.

The designers take over the mantle became a basic. However, it remains a signature of the house Burberry. In the late 1990s and early 2000s, the Burberry trench coat is a sign of bourgeois chic. He purrs. Not for long: Christopher Bailey, creative director of the house,arrived in 2002, makes a beast of style. Studded, embroidered, trimmed in leather, silk orraffia: he became the favorite weapon of war fashion.